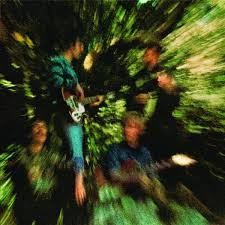 I can blame many things about my music adventure on John Fogerty.  Singing, composing, energy, production, longevity, and more recently, story telling.  In 1969 I was 13 and knew that being invited to sing with most of the aspiring musicians I knew (the 8th graders) was a bigger rush for me than all of the athletics, academics, choir, school government, girl scouting,  and social climbing that had been holding my interests. Before there was a boy in the group, there was the group, which I had gained exclusive entrance into through my best older choir girlfriend singer/guitar player.

These guys had cut their teeth on the Beatles, and were dead serious about writing and performing their own music.  I was  a second soprano in church, an alto in school choir…a very loud alto! The group started-out jamming through every Beatles song we knew between us, sometimes on piano and other times on guitar.  There were 3 guitar players, a bassist/guitarist, 2 drummers, and a keyboard player who could sing (like McCartney) and play everything, and play quarterback! Just after Christmas break (7th grade), the second studio album by Creedence Clearwater Revival – CCR – was released, Bayou Country.  And when I dropped the needle down on my new copy and the opening track began to play, I knew what I needed to do as a singer.

Enjoy this track from my iTunes library.

Born on the Bayou