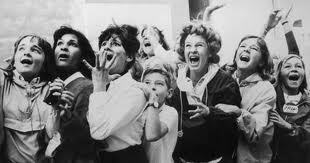 It is impossible to consider life as a musician of my generation without acknowledging the very core of it:   John, Paul, George, and Ringo.  When I first penned this post in 2014, there were celebrations and recognitions going on all over the world honoring the 50 year invasion of the band landing on US soil. I was 8 when Paul McCartney did his solo of “Yesterday” on Ed Sullivan’s stage. I was inconsolable for days afterwards…the power of a seamless song.

The Beatles’ sound was so original, with the fusion of all the influences they and George Martin shared as a collective source, each new record offered some ground-breaking performance.  That freedom bled into what they were writing, which in turn bled into the fabric of popular music.  It was hard not to aspire to songwriting if performing was your calling.

We have an extensive library of books written about the Beatles and their material. Seems that some accounts are considered more legit that others, but having a look inside/behind the scenes helps to solidify the truth that what they created together changed everything.

How many times does someone ask, “What is your favorite Beatles song?” –  always!  No matter how hard I try, it is almost impossible to commit. How about “What is your favorite song on each album?”…maybe, better options.  I know I am grateful to have come up in this musical time…the rock and roll break-through. They made me want to sing and write…write and sing! Thanks J,P,G & R…you are celebrated every day!