My Own Band – A Start 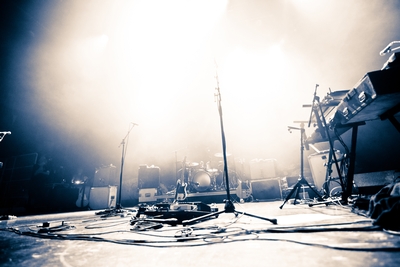 Once the songwriting vein had opened, the next move was to put a band together so I could perform my own stuff.  Challenge #1 – I was 6 months pregnant and, by all indicators, soon to be a single mother of two.  I knew I would have to work the music/band in with a regular job/regular pay to be able to provide a decent lifestyle for the 3 of us.

Here’s how things began to lineup:  I was put on medical disability by my OB/GYN at this time so I had endless hours of creative time to plan my band. I was writing constantly and there were 3 songs that I felt were strong enough to take into the studio. There were several earned favors to call in with players and studio engineers that I had lent my vocals to over the years, the demo was the easy part. Plans were building to get in the studio and record my first original tunes right after I gave birth.

McCartney (my daughter) was 5 weeks old when I did a long weekend in the studio with Michael Sanford, Mark West, Keith, and others. Now with a demo tape (love it) of originals, I could begin to attract band-mates.  Experience had already revealed that many bands with all the right stuff never made it out of the garage. But, I was sure that all of my plans would work, if I could just find the right guitar player.

If I could just…Lee: An Introduction