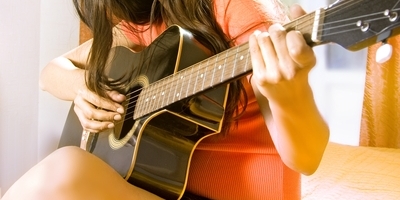 The crossroads of pre-adolescense and full throttle teens was a very interesting place to be in 1967. This is not to say that it isn’t a formidable life intersection no matter the generation, but as we have all come to truly know, the 60’s was all about change, period.  I was on the verge of becoming a musician. And I wasn’t alone, I had Barbara Jean.

Barbara and I were in choir together, both altos who were constantly asked to sing softer, stop trying to out sing each other…give the other voices a chance to be heard – “Sorry Mrs. Roth!”  Once we negotiated our strong voices and love of music, we began hanging out at Barbara’s house after school, where she would play her guitar and we would sing James Taylor and Beatles songs – my first duo.

Just as we were getting started, Barbara came into the realization that every guy she knew had a crush on her…really, every one.  I regret to say that this was her first distraction from music, athletics (another place where she truly excelled), and her studies.  Now let me stop right here and say…a real and worthy distraction for sure, but she never fully returned to music.  And, it is a shame because Barbara had one of the purest and strongest country (a la Martina McBride) voices in the making. Singing with her was like running with a thoroughbred, it just ups the run.

She and I both had children early on, and relationship ups and downs.  One time, after The Imports were happening, I met some musicians at a club who were looking for a female country singer.  I talked (brow beat) Barbara into checking it out  and went with her to the audition.  She was remarkable, and the band loved her. They offered her the gig, but she knew that her personal life would not support that commitment and ultimately declined.  I think she was satisfied enough that she had made the effort, landed the gig, and could put a check mark in a box that had been empty for too long.

I know she was proud of me for my songwriting and pursuing my own band.  She would come to see The Imports from time to time, even though hard rock wasn’t her favorite. She was a sister, soulmate, and someone I loved very very much. Barbara passed away on 11-11-2011; I had not seen her for several years.  I can’t hear Sweet Baby James without hearing her playing it on her guitar and us harmonizing.