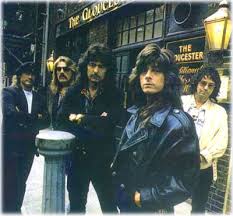 Recently, my pal Jerrymac made one of his re-known big sweeping comments.  I can’t quote it precisely, but the general statement was that female vocalists have it easy taking on tunes that were originally written for and suited to male vocal ranges.   Ok , I feel you J.   However, I would have to add that not all tracks originally scored for male vocalists give any of us rock-singing chics an advantage…like most tunes sung by Foreigner’s Lou Gramm, Steve Perry of Journey, or JLT, Joe Lynn Turner.

The Imports were born  just a few months after MTV premiered with just a few artist videos in rotation – The Buggles’ “Video Killed the Radio Star”, Pat Benetar’s “You Better Run”, and Rainbow’s “Can’t Happen Here”, the latter of which I could not get enough. And the singer, JLT, just cranked the vocals straight out…that was the crank I wanted to exude vocally in my new band.

I have never really followed Mr. Turner, other than to think of him as one of my favorite rock voices. His website, JoeLynnTurner.com, is an indicator that he has a decent following, both in the States and abroad.  I am so sorry to say that, as I went gathering more background info, JLT seems to have been at the center of a Rockers Who Wear Wigs internet frenzy along with David Coverdale and others…pls.

It is the airways hit, “Endlessly”, from his 1985 solo record, Rescue Me, that owns me.  I never got the chance to work it into an Imports songlist, but I have ripped this one up in the shower…endlessly! Have a listen, check out JLT‘s website, learn more…and don’t forget to turn it up…