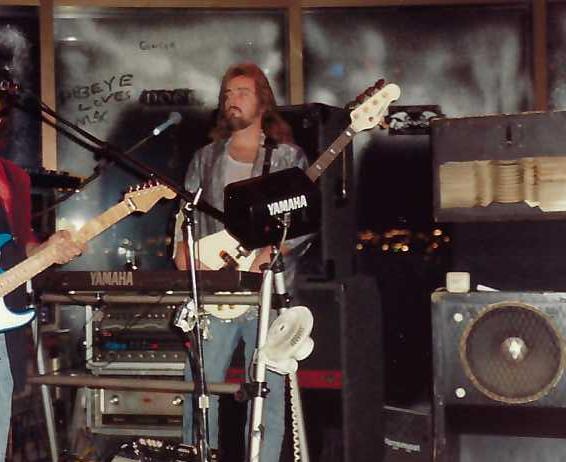 I have held off too long on writing this post, and I know he would be unhappy with me. I’ll start where I should, which is at the beginning.

Denny King had been with Smokey for some time when I joined the band to rehearse with them towards Delorean, the performing entity of the Delorean/Kerbey recording project. Even though all members of Smokey agreed to let me front the live band (paying gigs), with me came a whole bunch of new tunes to learn, including pop covers they would have never considered performing under any other circumstance. I needed to get my act together as well, having not performed live since the The Imports ended in January 1986.

So the “Smokies” came around and we had some really good times on stage for the year I was with them, in the process of getting our act and sound down for a major label showcase. Denny was the one Smokey, who seemed to fully embrace the changes. He became my stage antics partner and dressed with a 80’s flair. I realized a few weeks in that he was watching over me and helping me fit into this band of brothers.

Denny had a great reputation around town as a solid bass player who liked to try every new instrument available, and invested in improving his sound. He also joined in on backing vocals and liked to have a few tunes to sing lead on. If Denny was in your band, the rhythm section would be air tight.

Many of you reading this will have figured out why this was a hard post for me to write. Several years ago Denny contracted West Nile and continues to have an up and down journey with recovery. I have visited with him privately, along with other musicians and friends. I am always beyond humbled at his persistence and grace. A few of his musician pals have held fund raisers to lend support for medical expenses and personal extras. Local Arizonan musicians, Chuck E Baby and Barry Lipkin, often play acoustic sets at the care facility for the other patients as well as to entertain their friend.

The last time Denny and I played together was at an outdoor party in 2001. We got the band back together! And in true Denny style, he was rehearsed, brought along most of his bass toys and had a big happy smile for everyone.

Love you DK.  See you next time we are in town.