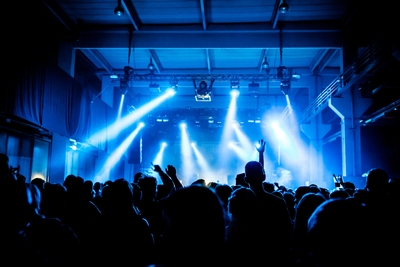 There were spots that every rock band wanted to play at in Phoenix in the 80’s. Most of the truly desirable clubs were around ASU in Tempe.  Dooley’s (aka After the Gold Rush), The Devil House, The Library, Hammerheads, and my personal fave, Clyde’s Rock Habit…the magical!  Magical because it was the location of The Imports’ debut; we played there frequently and built our following there, and 2 hours before the place went up and then crashing down in flames, we got our uninsured PA system out of there. 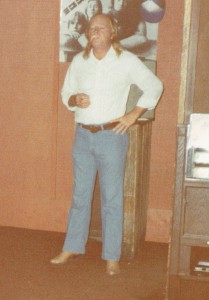 Clyde was a quiet, crusty but lovable owner/operator. I really didn’t know that much about him other than that he paid us respectfully, treated me like a daughter, and believed in our band. There was outdoor space to play, which is where we had a Sunday all day rock chics concert with Red Alert (Murph and DR), Lori McDonald, and The Imports, which was a CRH highlight!

Here is Clyde standing as he did every night by the door; hey, check out that poster behind him! One night after a typical 9pm ’til 1am, 4 set night, Clyde approached me on our last break and said, “You should tear down tonight!” When we played on Sunday night our typical arrangement with Clyde was that we could get in there the following morning and tear down. The club was closed on Monday’s. Clyde said he had to be out of town, apologized, and then walked away. The band was so bummed. Lee took the get it done attitude (as always), I went home and got a few hours sleep in before getting up to get my little ones off to school.  At 9am the next morning I got a call from Billy Martin that Clyde’s Rock Habit had gone up in flames in the early morning hours. I drove over to the club and there was Clyde, standing in the parking lot surrounded by fire trucks and a smoldering building.

What I remember as I walked over to him, was he looked shocked/stunned…and so was I.  I just kept saying, “Wow, I can’t believe we got our stuff out…I can’t believe it”.  Clyde didn’t say much at all, other than I would be contacted by the fire investigators at some point, that he had given them my name and number.  I was interviewed, nothing ever came of it, and I never saw Clyde again. Having heard so many horror stories about bands losing equipment from club owner negligence, theft, fire, evictions, I can’t help but think fondly of and remember Clyde’s Rock Habit…the magical! Thanks, Clyde.