In 1982 a widely successful business guide titled In Search of Excellence made its rounds on the best seller lists and the nation’s top executive “must reads”, for them to stay relevant. The writer, Tom Peters, is cited as the original guru of personal branding. I put together my first band under my direction that same year, and the influence of branding had come into my reality through the marketing degree I was pursuing, one night class at a time, at a local business-centric community college.  Now you can do this online; how great is that when you are living on musician’s hours!

I hadn’t even given branding a thought until the band was settled with committed and talented players and we needed promotion.  I was raised on 60’s and 70’s band names and album titles, for instance Quicksilver Messenger Service, Buffalo Springfield, Big Brother and the Holding Company with album titles like “Chunga’s Revenge”, “DejaVu”, “Magical Mystery Tour”, and “Tumbleweed Connection” – talk about branding!  I’d like to swagger a bit and say it was a brilliant Tom-Peters-searched excellence moment that led to my personal branding.  But it wasn’t. Even better, it was my good friend, sound/lights/do all for rock & roll roadie, Billy Martin.

My day job was in the car business, and a very prosperous one it was. Imagine how my parents felt when I announced at age 25, newly single with a 4 year old and an infant, that I was going to phase out of my great job and start my own band!

Billy and I were sitting around the post-rehearsal table discussing how to shop the band out to the local club scene when Billy pointed out that it would be a good idea to have a name before developing the bigger scheme. Good idea! I really hadn’t thought much about having a stage name, but I knew that my maiden name wasn’t going to scream very loudly, and Billy agreed.  Then, in what was a process of under 2 minutes, my constant life guru/pirate/consigliere suggested, “How about something from the car business, since it relates”…Ok, I like that.   Debye: “How about The Imports? Billy:  “How about Debye Delorean and The Imports”… done!  After that, banding was easy. 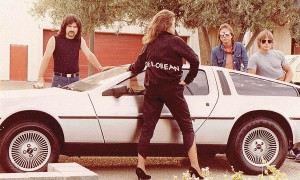 How many times do you think the conversation of cocaine came up…still does! John Delorean, the down-side of branding!  In 1985, after my attorney pointed out that my songwriting copyrights were all in Debye Delorean, I had my name legally changed. It was and continues to be a brand that works for me. Thanks Billy!